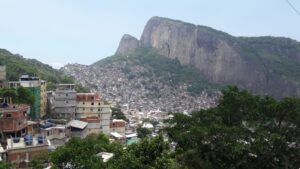 With over 250.000 inhabitants, Rocinha is considered the largest favela in South America. After over 40 years of “parallel power” marked by armed conflict between drug-dealers and local police, Rocinha was the theatre of an important historical event in November 2011: the UPP (Police Pacification Unit), along with other special corps and military squads, occupied the area and “dismantled” the drug trade. 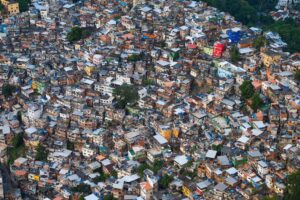 Despite this, the favela still lacks basic infrastructure and services and lots of families live in severe poverty. In comparison with the past, Community life is quieter, but essential requirements such as sewers, running water, city lighting, education and health are still missing. Furthermore, very often episodes of police abuse of power, human rights- and citizenship rights violation are reported.
Lying on the slopes of Mount Dois Irmaos (Two Brothers), behind the rich areas of São Conrado, Leblon and Ipanema, Rocinha is afflicted by many problems: bad sanitary conditions, overcrowding and damp homes facilitate the spread of infectious diseases such as cholera, yellow fever, hepatitis, meningitis and dengue fever. 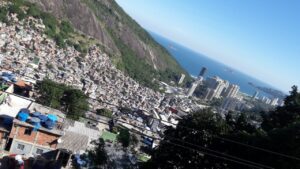 Besides, residents are discriminated against and confined to a ghetto. They often struggle to have access to basic education and health care. Access to the job market is complex and demotivating and unemployment is rampant.

In this critical period of transition, the non-profit organization “Il Sorriso dei miei Bimbi” serves the community with sympathy, acting as an intercultural bridge between Italy and Brazil and as a keen observer of the needs of a population struggling for recognition, dignity and rights.

Rocinha developed in the early 30s around a first settlement, founded by immigrants from Italy and Brazil’s North-east, consisting of a few huts made of wood or other recycled materials. Since then, the favela has grown bigger and bigger and now you can find buildings made of concrete and bricks with water, phone and electrical connections (althoughoften unauthorized and illegal) and commercial activities.

Since then, the situation in Rocinha has incredibly stayed more or less the same until November 2011. Through the years, the Community of Rocinha was one of the most important cocaine and cannabis markets in Brazil. Armed conflicts among drug-trafficking gangs or between drug-lords and police erupted frequently in Rocinha, with traffickers not hesitating to use civilians as human shields during the raids. Civilian lives were lost, mostly victims of stray bullets (Bala perdida). 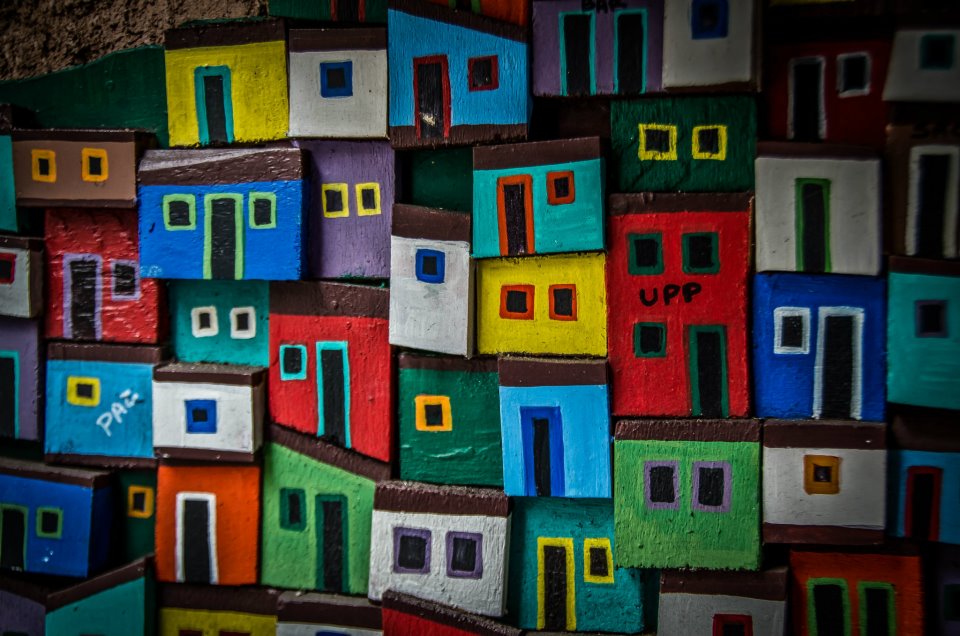 In 2011, the UPP (Unidade de Policia Pacificadora), together with other special corps and military squads, occupied the favela and dismantled drug-trafficking after over 40 years of “parallel power”. The operation was carried out within the plan elaborated by the Secretariat of State for Civilian Security in Rio de Janeiro, whose aim was to get rid of drug-dealers in the city’s largest favelas (there are more than 1,000 in Rio). There were moments of high tension, fear and panic, but violence was not necessary and no shots were fired.

The UPP’s liberation operations were part of a plan drawn up by the Public Security Secretariat of Rio de Janeiro State, which aimed to dismantle the drug-trafficking business in the state’s major favelas. The situation improved and the environment has become more relaxed and peaceful, although the goal has not been achieved in full.

Recently, after the 2014 Fifa World Cup and the 2016 Olympic Games, conditions have deteriorated, with Rocinha becoming once again the stage of armed conflict between drug traffickers and police. Since September 2017, urban violence escalated further after competing gangs resumed fighting to control Rocinha, taking the favela to new levels of instability.

Between 1896 and 1897 thousands of “sertanejos” (inhabitants of the Sertao Region), guided by Antonio Conselheiro, moved to the State of Bahia and founded the town of Canudos to escape the dreadful situation they lived in. They were fed up with suffering humiliation and survival difficulties in the north eastern area affected by latifundism and severe drought. 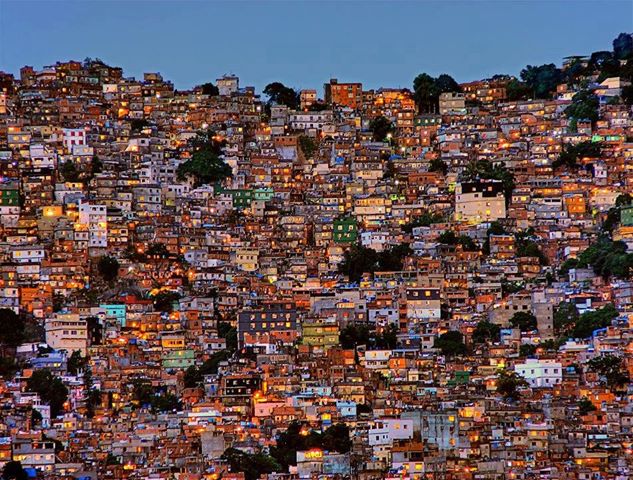 Lots of sertanejos settled near “Morro da Favela”, which owes its name to this plant (fava). Fearing that the riot might shake the foundations of the newly born Republic, the central government ordered a real slaughter in Canudos. There were thousands killed, mass torture and rape. This event still represents one of the darkest pages in Brazil military history, yet more deplorable, considering the massive popular consent it received. When republican soldiers came back to Rio de Janeiro, they stopped receiving wages and, owing to the deterioration of their living conditions, they were forced to settle in wooden huts with no infrastructure, on the hills surrounding the city. The settlement was named “favela” to remind the terrible conditions of Canudos. The first one was “Morro da Providencia”.

This type of lodging was used in the past by freed slaves who could not afford to live in town and therefore began to settle on its hillside. The term “favela” or “slum” was soon applied to all illegal dwelling and was considered as synonym of poverty, abandon and social decay.

Since then the situation in Rocinha has incredibly been more or less the same until November 2011, when the UPP (Unidade de Policia Pacificadora), together with other special corps and military squads, occupied the favela and dismantled drug-trafficking after over 40 years of “parallel power”. The operation was carried out in compliance with the plan elaborated by the Secretariat of State for Civilian Security in Rio de Janeiro, which aim was to get rid of drug-dealers in the largest favelas of the city (more than 1000). Yet, there were high tension moments, with fear and panic, however violence was not necessary and no shots were fired.

CURIOSITY: The origin of the name “Rocinha”

In the 30s, after the crash of NY stock exchange of 1929, which forced many coffee growers to file for bankruptcy, the estate of Fazenda Quebra Cangalha was invaded and divided into small farms. Their products were then sold in Santos Dumont Square, where supplies from the southern area of the city were delivered. So, when customers asked where all those vegetables came from, farmers answered: “They come from over there, from a small field (roca – rocinha = field; editor’s note), just above Gavea neighbourhood.”